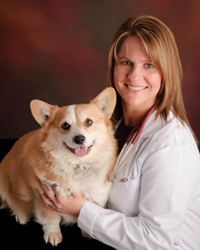 After six years of practicing traditional veterinary medicine, Dr. Woodford founded Veterinary Integrative Performance Services (VIPs) to provide chiropractic and acupuncture care to animals. She has given several educational demonstrations, taught courses at Kirkwood Community College and has written educational articles for animal owners. She has worked on a wide variety of animals such as dogs, horses, show cattle, sheep, goats, and the occasional llama and has a proven record of delivering effective results.

In 2012, Dr. Woodford and Jackson were #1 in the Nation in the Amateur All Around events in the Pinto Horse Association.