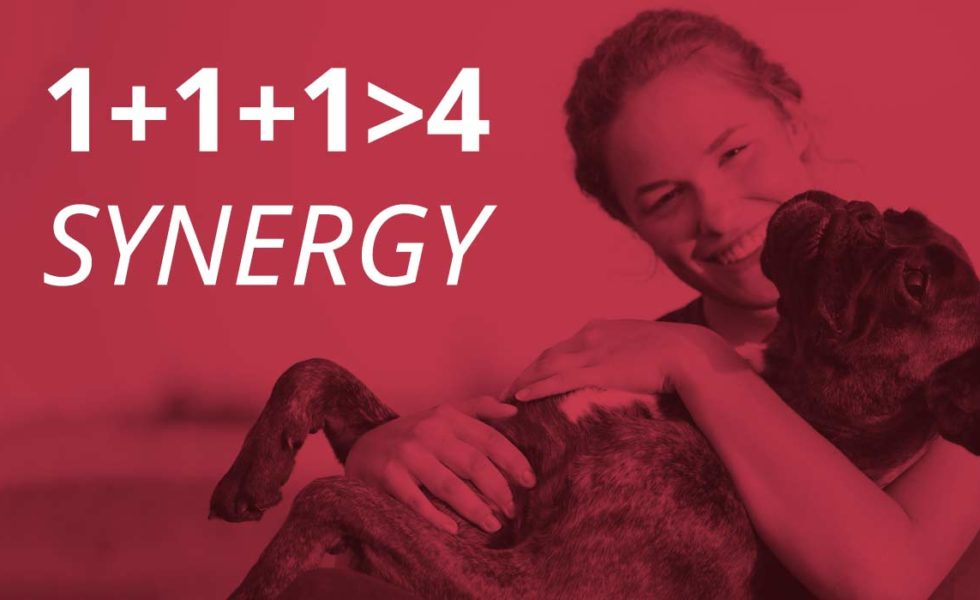 1+1+1= synergy. Synergy is “the interaction or cooperation of two or more organizations, substances, or other agents to produce a combined effect greater than the sum of their separate effects.”

I have witnessed the synergy of the therapies that I use to treat animals in my practice. Namely, I use chiropractic, acupuncture, and magnawave therapies on most of my small animal patients with obscure neurologic conditions. Although I do use each of the therapies individually, I have noticed particularly impressive results when I have employed them in combination.

I want to share a success story with you about Hooch, a 4 year old boxer, who benefited from the synergy of regular veterinary medicine, integrative therapies, and good cooperation on the part of his owners. The first time I saw Hooch, he was not using his left hind leg correctly. He had no proprioception in that foot; thus, he was not bearing weight on the bottom of his foot. His toes were knuckling over and he had sores on the top part of his toes from dragging his leg behind him. The owners reported that two weeks prior Hooch had been playing outside with his housemate, a French Bulldog, and came in non-weight bearing on his left, hind leg. They took Hooch to their regular veterinarian and the X rays showed no broken bones. Their veterinarian suspected a pinched nerve and recommended anti-inflammatories and rest for 2 weeks. Unfortunately, Hooch did not improve during that time frame. At that point, their veterinarian recommended my services for the nerve damage.

On the first visit, I treated Hooch with acupuncture, magnawave and mild chiropractic adjustments since we suspected a pinched nerve. I also recommended some stretching and range of motion exercises that the owners could do at home. Five days later, Hooch came back to my office and we saw some improvement. He was able to correct his toe placement about every 3 steps.The owners were very happy with his progress and we continued with the same therapeutic protocol.

The next week, the owners came back with Hooch whose condition was greatly improved. He placed his foot correctly 90% of the time.

One week later, I saw Hooch again and he actually wanted to run and play!

Hooch still has some movement and nerve deficits in the left hind leg, but he is placing the foot more correctly, the sores on the top part of his toes have healed, and his muscles in the hindquarters are more developed. I recommended short, controlled, leash walks, supervised socialization time with his housemate, and rest for the next month. Additionally, Hooch will receive the three therapies every two to three weeks. Thereafter, assuming Hooch continues to improve, we will maintain him with monthly treatments. Hooch’s progress is a testament to the efficacy of acupuncture, magnawave and chiropractic therapy on neurologic conditions, generally, and the synergetic effects that result when we use the three therapies together.

I am grateful for Hooch’s dedicated owners who are committed to continuing with his therapy and at home exercises. It is rewarding to be able to provide effective therapeutic services for animals, similar to Hooch, with obscure nerve or movement conditions that are difficult to diagnose and treat. The synergistic effects of chiropractic, acupuncture, and magnawave therapies have helped me treat several animals with movement issues. As a veterinarian, it is gratifying to have access to therapies that help restore injured animals’ functionality, fully in some cases, and partially in others, and enable them to lead happy, active lives.